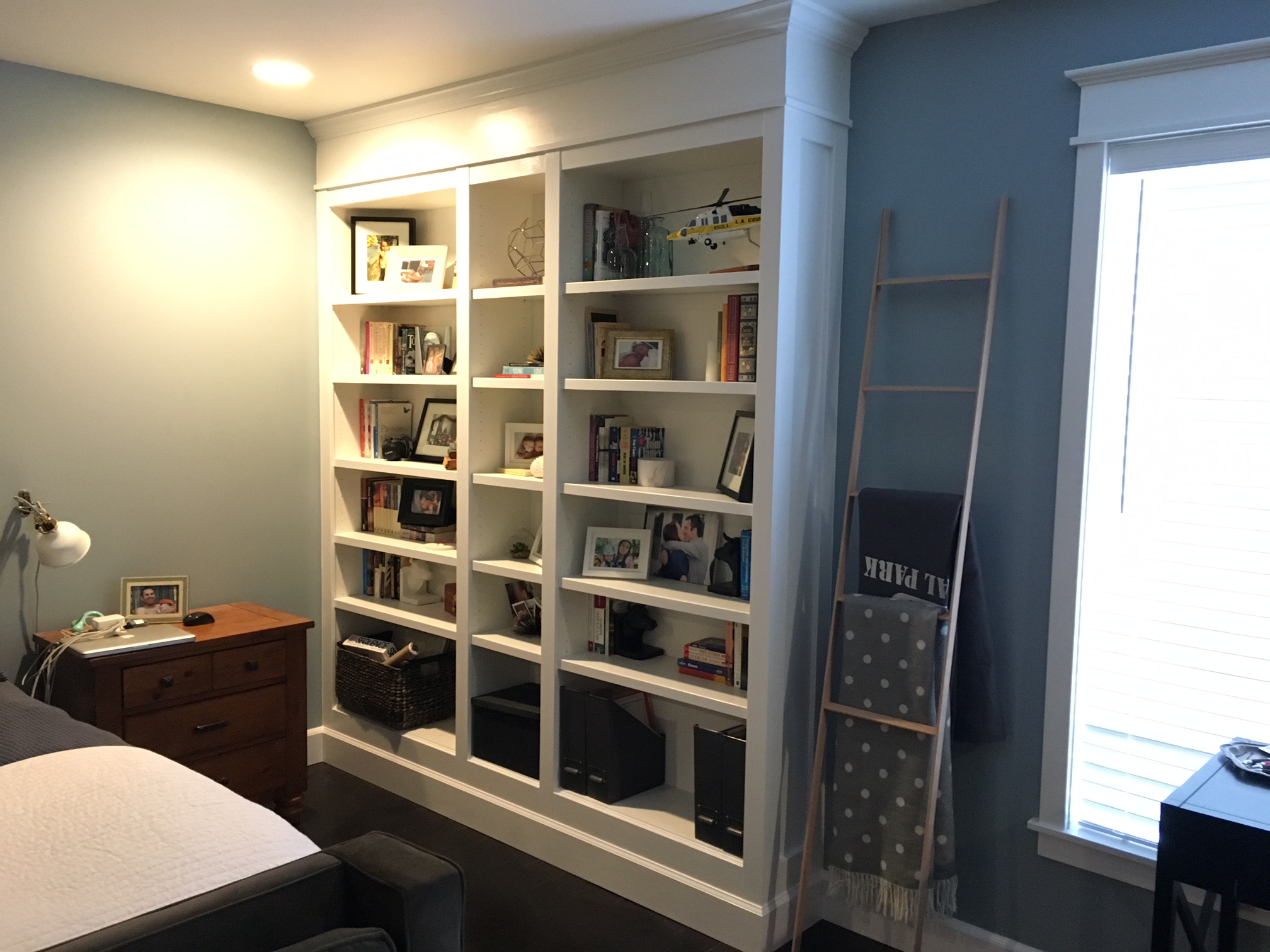 Because everyone has done one. Ikea has a few timeless products that get hacked over and over and I hope they never phase them out. One of which was Tarva – those are gone but another is the Billy. It seems that every diy site has a Billy hack somewhere and ours isn’t anything special – except that it’s ours. I had been planning a wall of Billy since the design of our master bedroom. Sure, I could have built my own bookshelves from scratch – and I’ve done that when the dimensions didn’t fit something Ikea had that I could hack. But I chose Billy for this because the dimensions worked and also the cost of using the Billy was only 100 bucks more but came painted, cut, finished and ready to use. If you are looking to do this on the cheap and you have plenty of time then build your bookcases out of sanded plywood, sand, prime and paint them…but if you are willing to just spend a little bit more and save yourself some serious time using the Billy just makes perfect sense.

So, without further ado, our wall of billy: 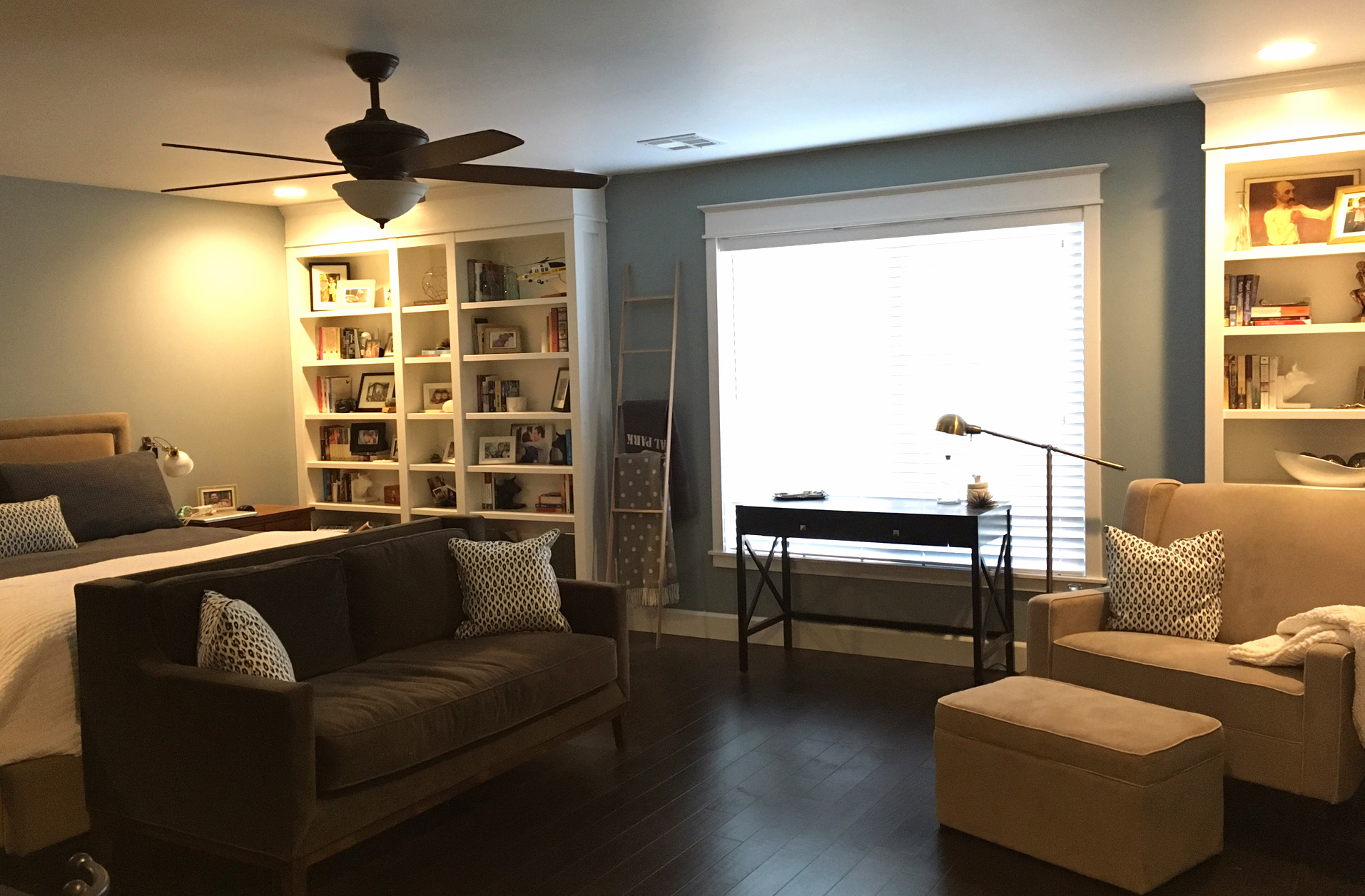 Everyone has different storage needs and space. We were able to fit two standard Billy’s on the left side (31.5″ wide) one half width (15.75″) between them and one standard Billy on the right. We did not use the height extensions. Our room has 8′ ceilings. Mike and I built a platform to put the Billy’s on so that we could use the same baseboards we have throughout the house to make them appear built in. Then I added trim to the top that matches the trim I put in around all the windows.

Step 1: build your Billy’s – preferably in the room you want them and put them in their relative space. We attach the backs with a stapler rather than going crazy with the billion teeny tiny nails they provide. We separated the Billy’s by 3/4″ – basically the width of the plywood we had leftover from another project. I knew I wanted to add trim to the front of the Billy’s to hide the gaps and that seemed to be just the right width for 1×3″ trim. See the gaps? 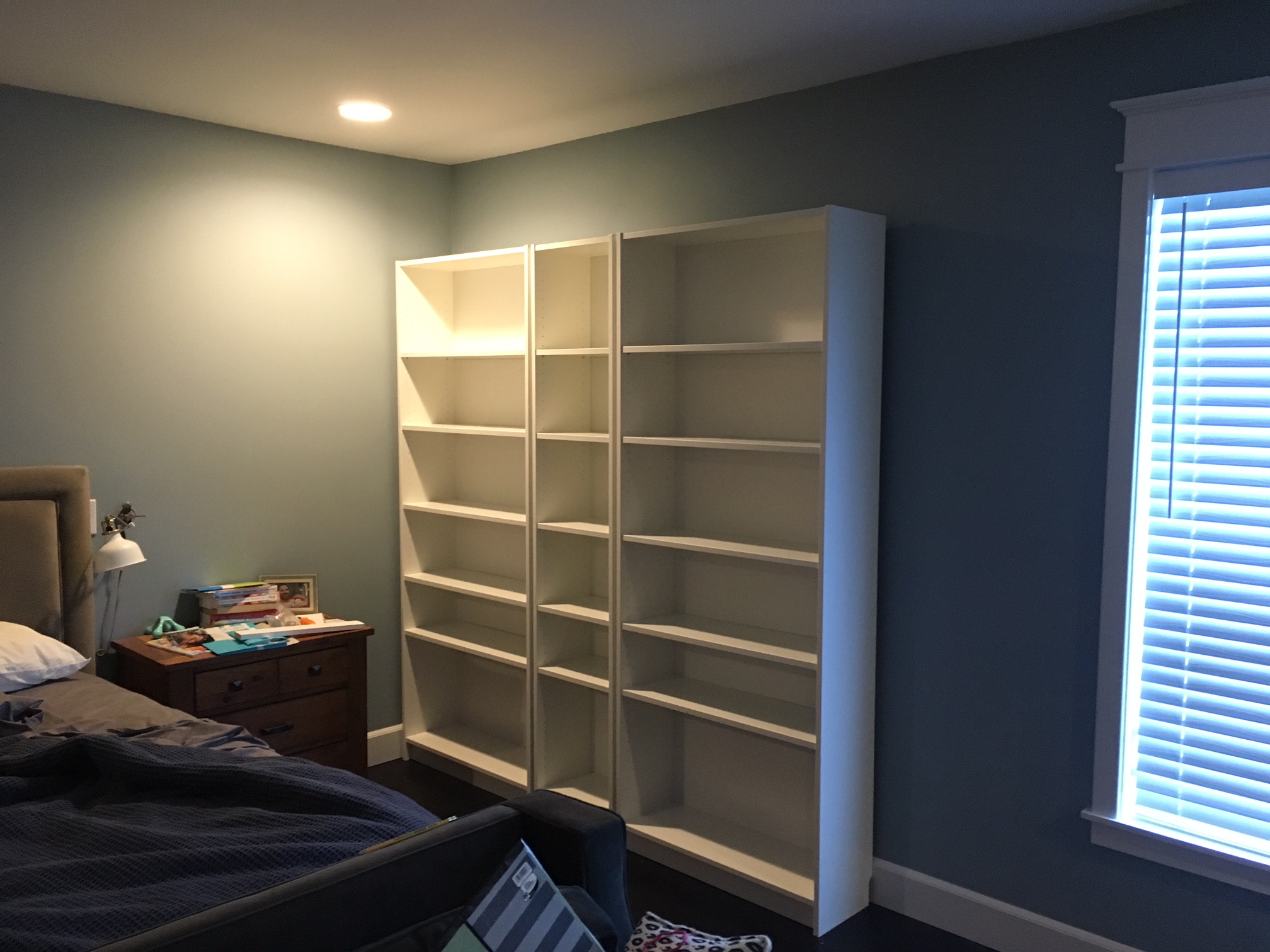 Now take a really, poorly exposed picture of how happy you are to have put together four Ikea items without any meltdowns. 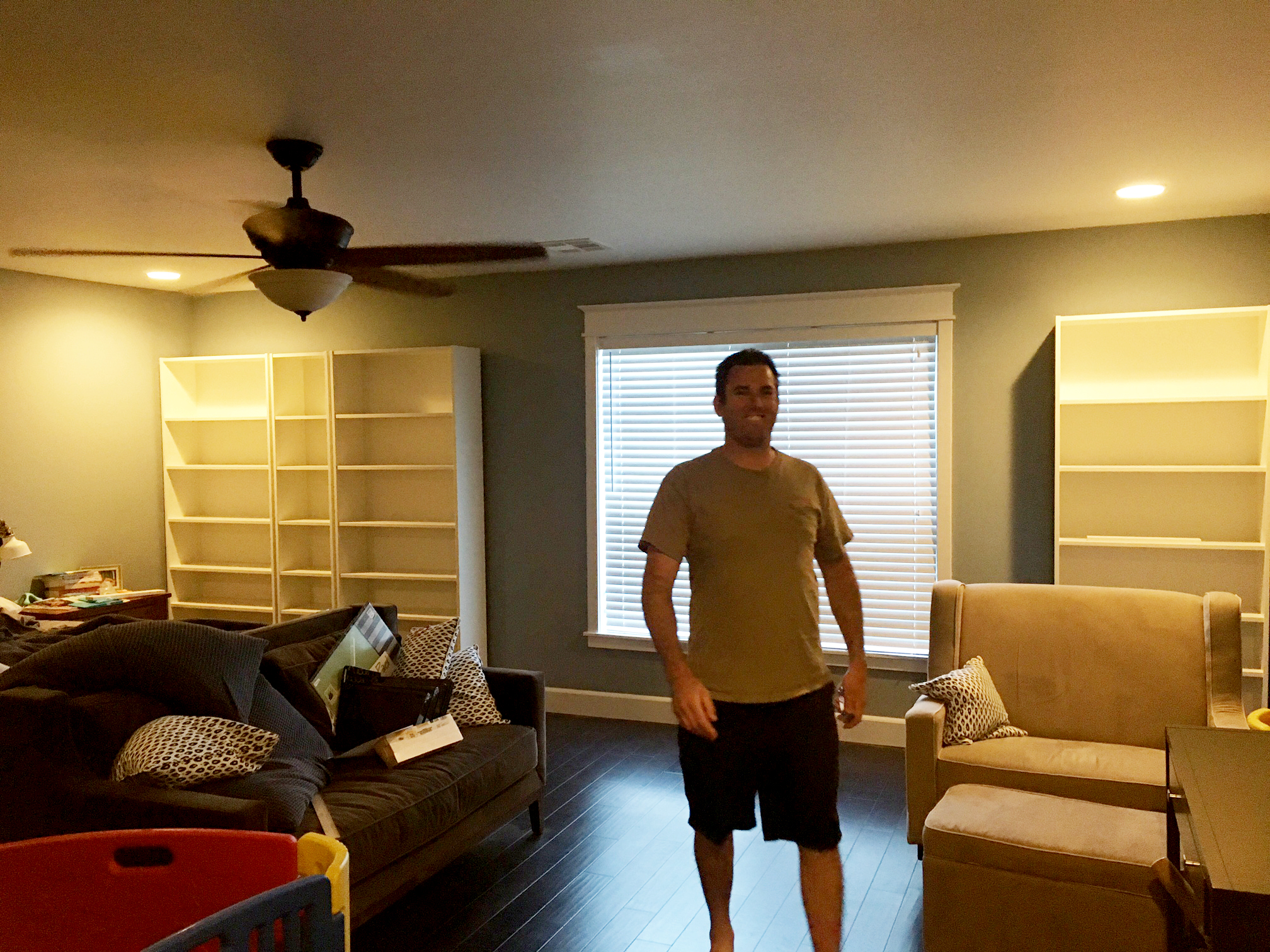 Step 2: now that your Billy’s are in place you can measure and build your platform. We built the platform out of 3/4″ plywood that we just finish nailed together along with a 3/4″ top. We had this 3/4″ left over from something else, you can use whatever you have as long as you take care to make it square and structurally stable. We made it flush with the billy bookcases that would sit on it so all the trim would line up. It is about 5″ tall. 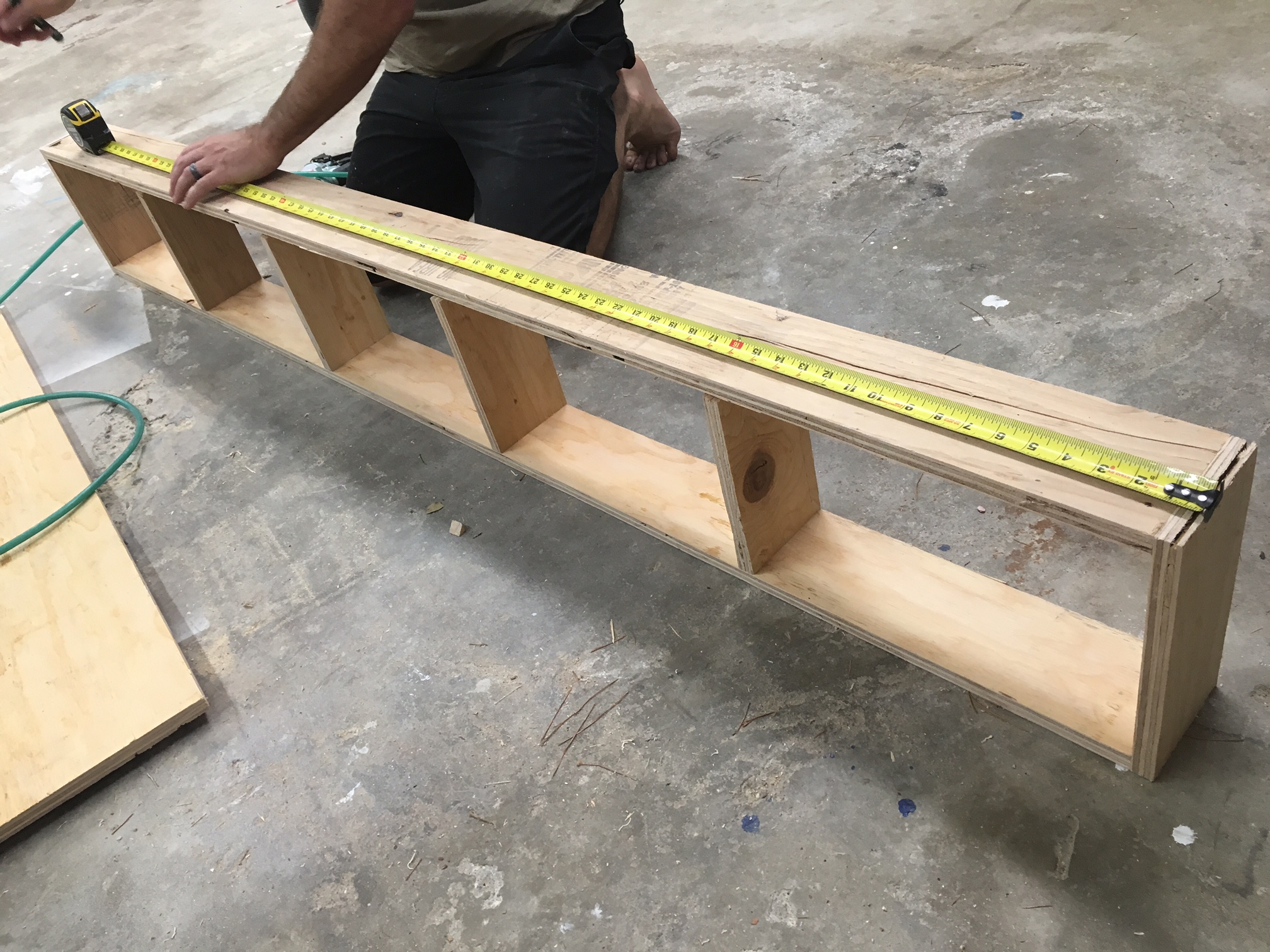 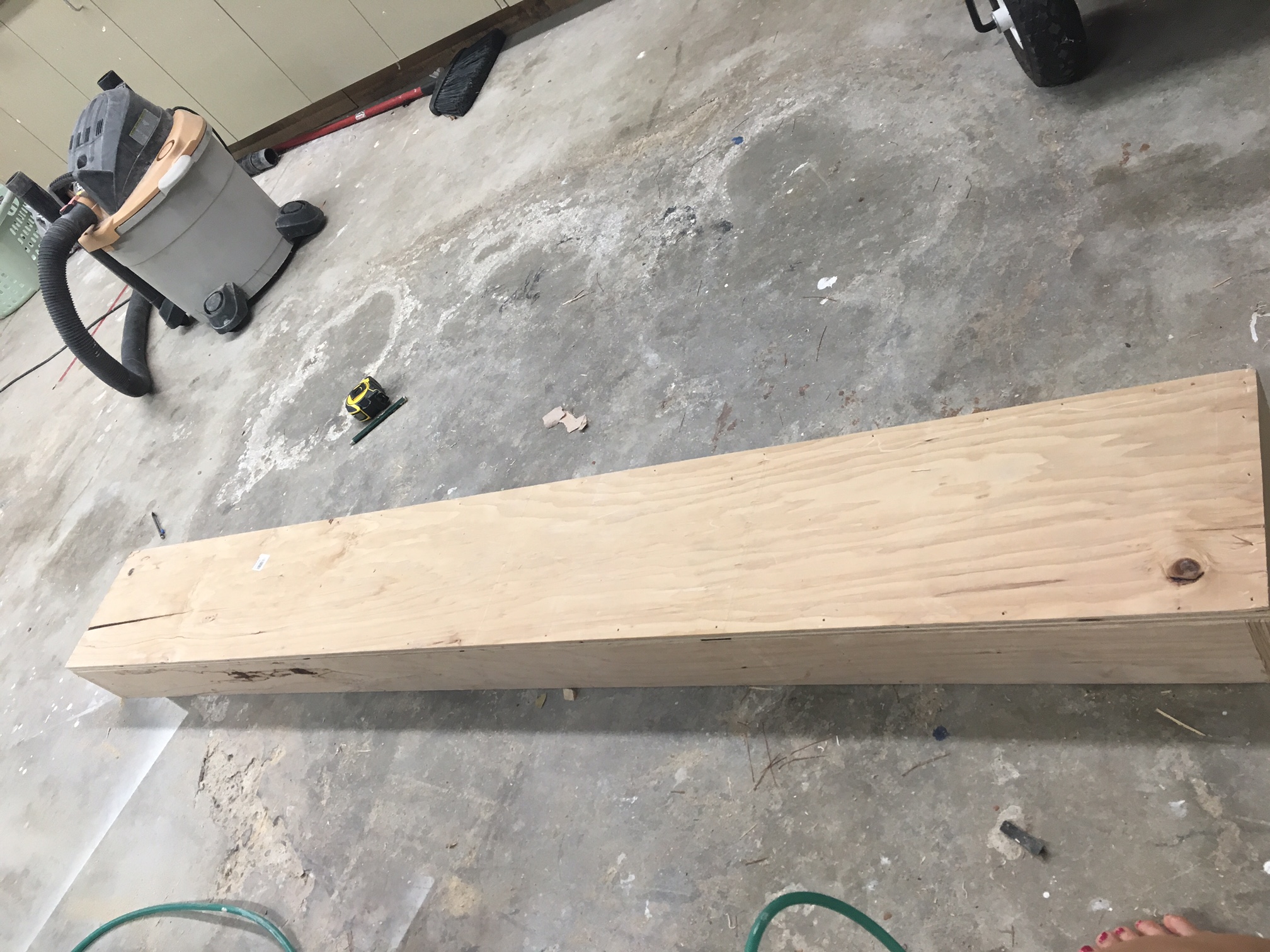 Step 3: attach the billy’s to the platform. We used screws to attach them into the platform in areas that would be covered with trim. Be sure to use shims and a large level to make sure everything is level and square. We then attached the billy’s together by screwing through the 3/4″ filler between them. This all got concealed behind trim. 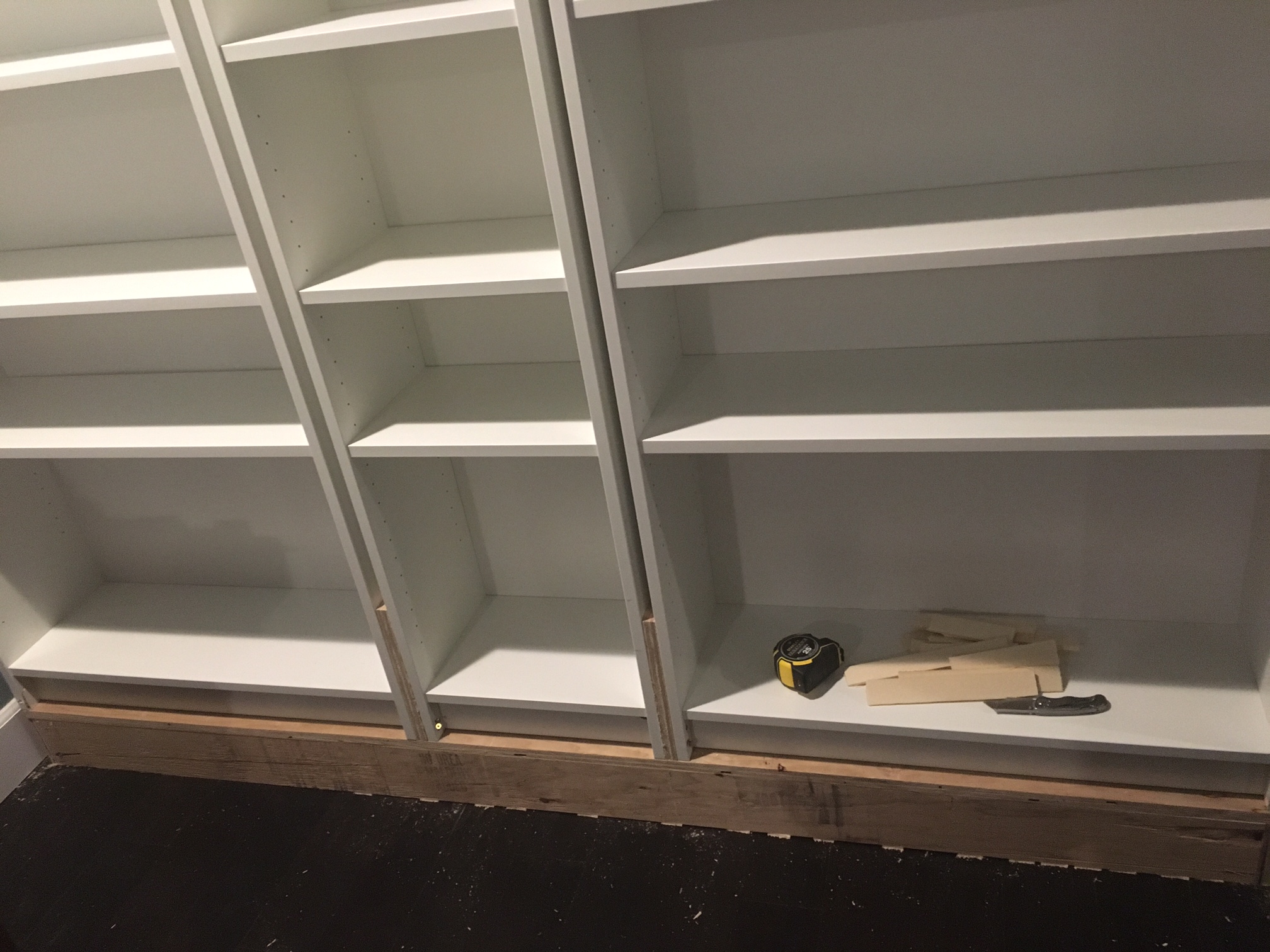 Step 4: secure the billy’s to the wall. We live in California and an earthquake could easily shake these over so we never skip this step. We used the brackets that come with the bookcases and some more leftover wood screwed into the studs in the wall. We used 2 1/2″ long screws. This put the screws about 1.25″ into the stud. We used two screws per stud. 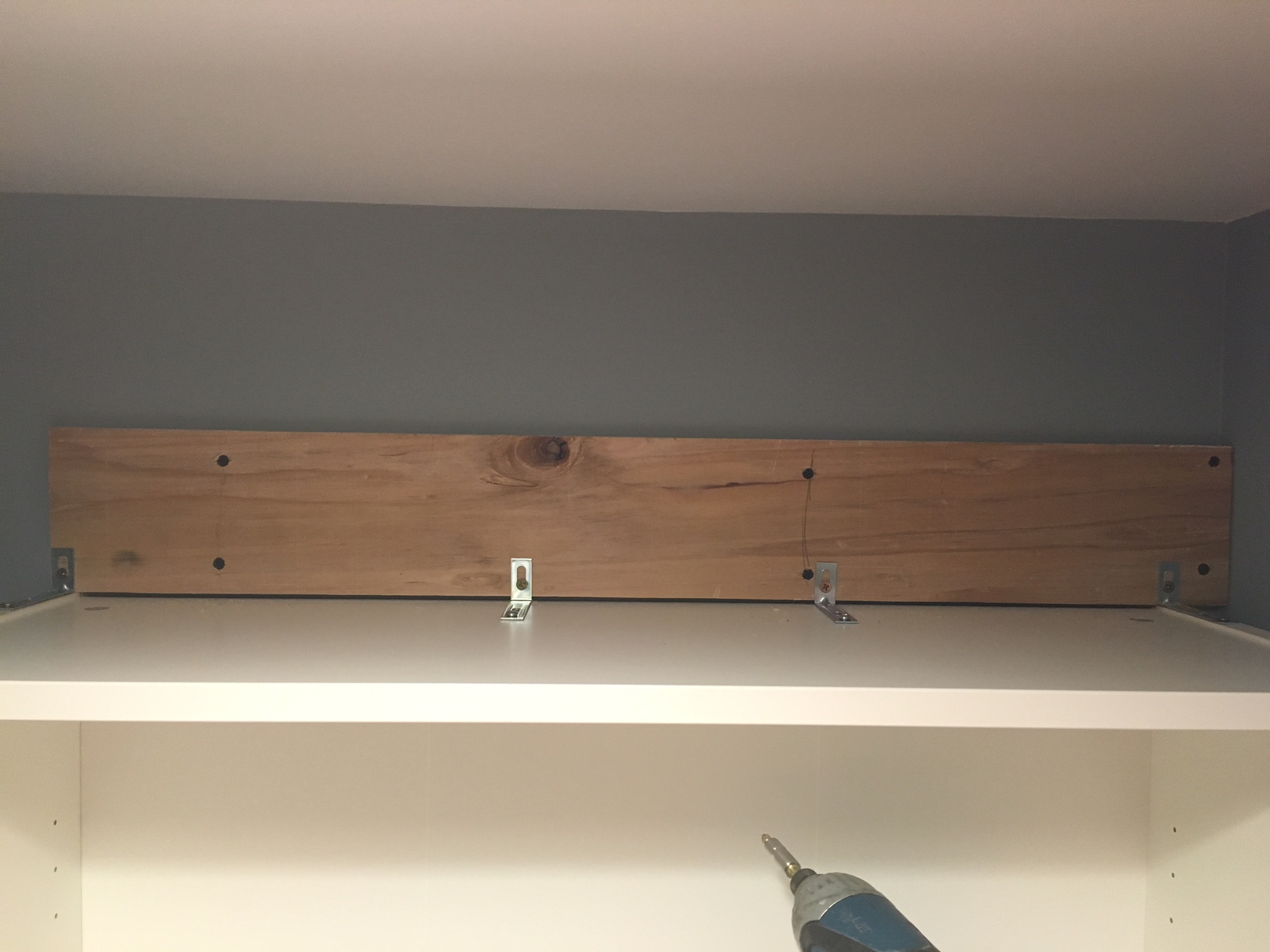 Step 5: add the trim. I installed the vertical pieces first. I purposely took them all the way to the ground and extended them 2.25″ over each top. 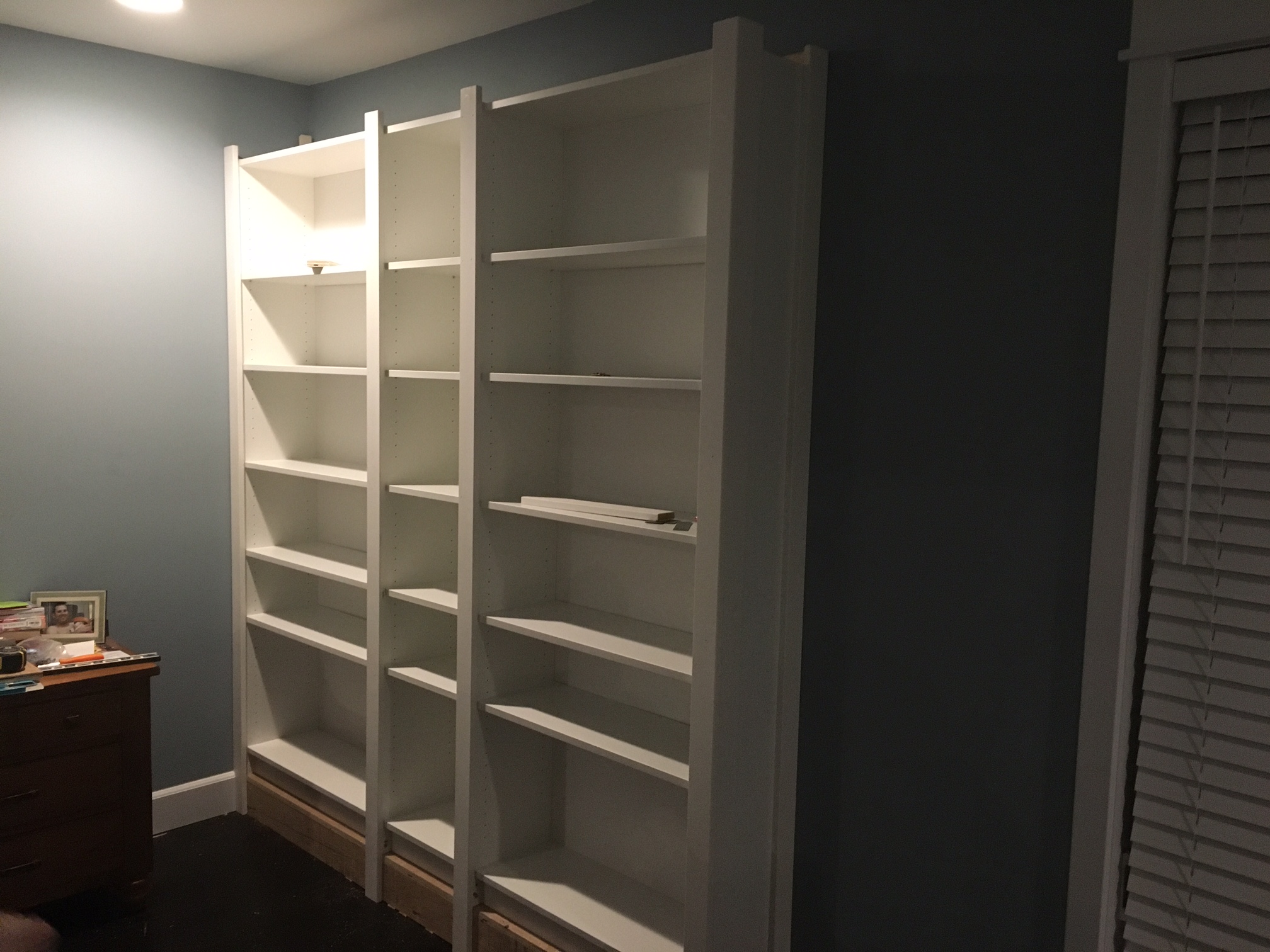 Next I added trim between the verticals. I used 1×3 for the top horizontals and verticals and 1 x 8 for bottom the horizontals. 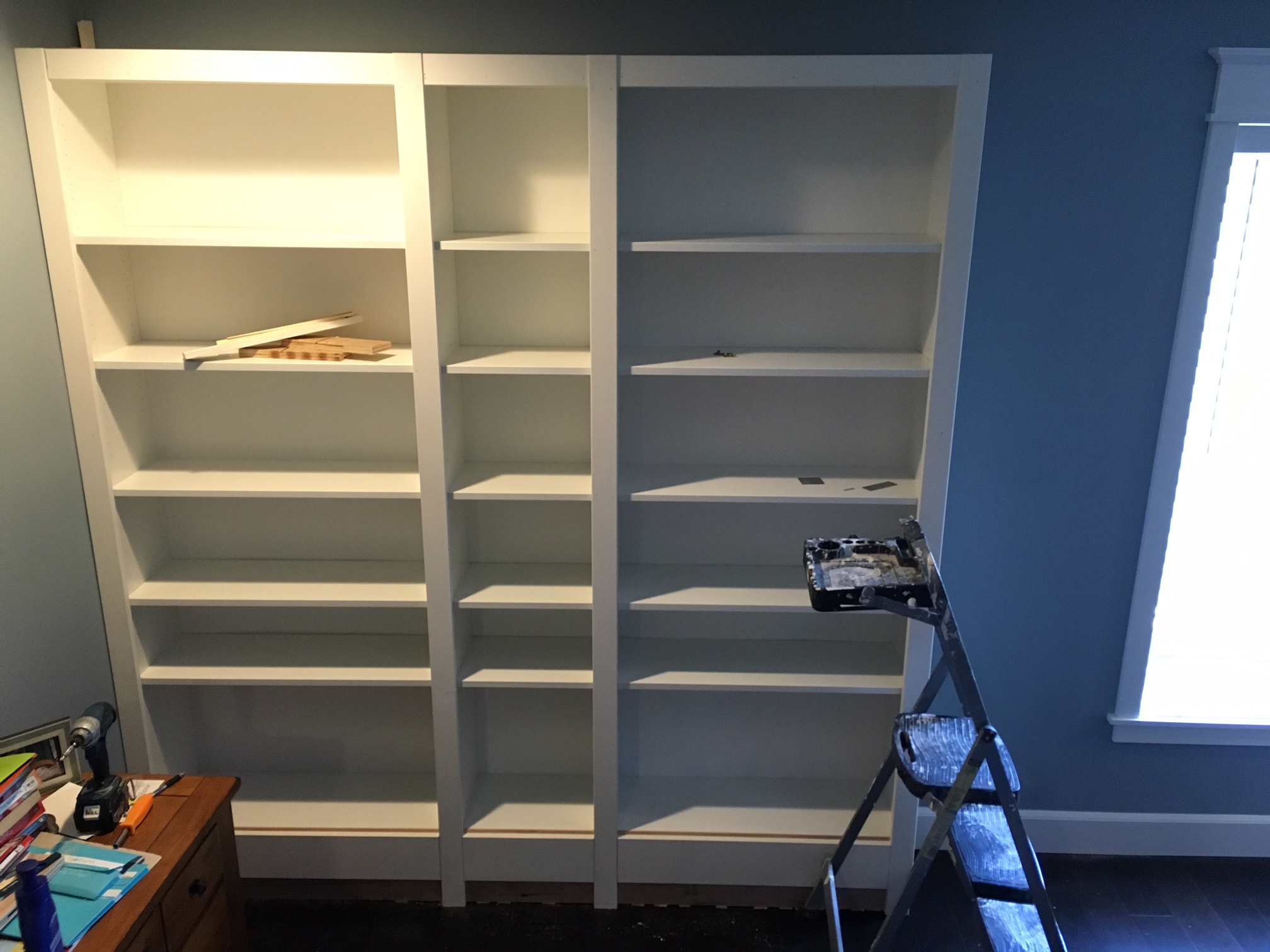 Attach the baseboards and realize there is a nice gap that needs to be filled between the bookcase base and the horizontal trim. Nail some 1/4″ lattice wood in the gap and soften the edge with a 3/8″ dowel. I glued the dowel in place with caulk. Also, for the baseboards, I didn’t remove the baseboards behind the bookcases. Mike didn’t want me to, one because I had finally just finished caulking and touching them up since the addition and two, just in case we ever wanted to remove the bookcases (yeah right – these things are the best part of our room). In order to leave them in place and join the new baseboards to it I coped the interior corner joints. I have a really great trick for using your miter saw to cope joints if you’re ever interested. Careful though, once you learn to cope you may never join baseboards together in any other way! 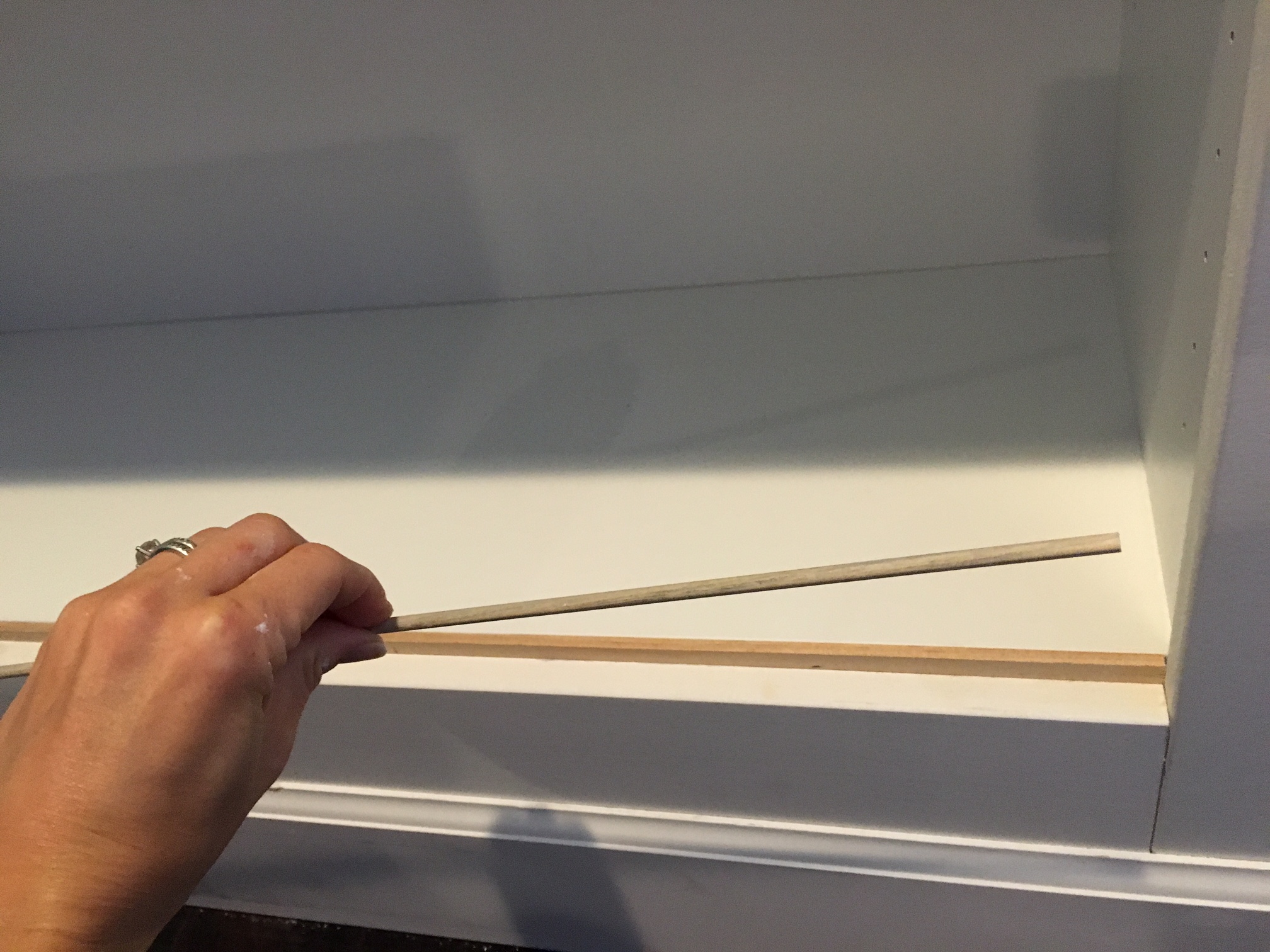 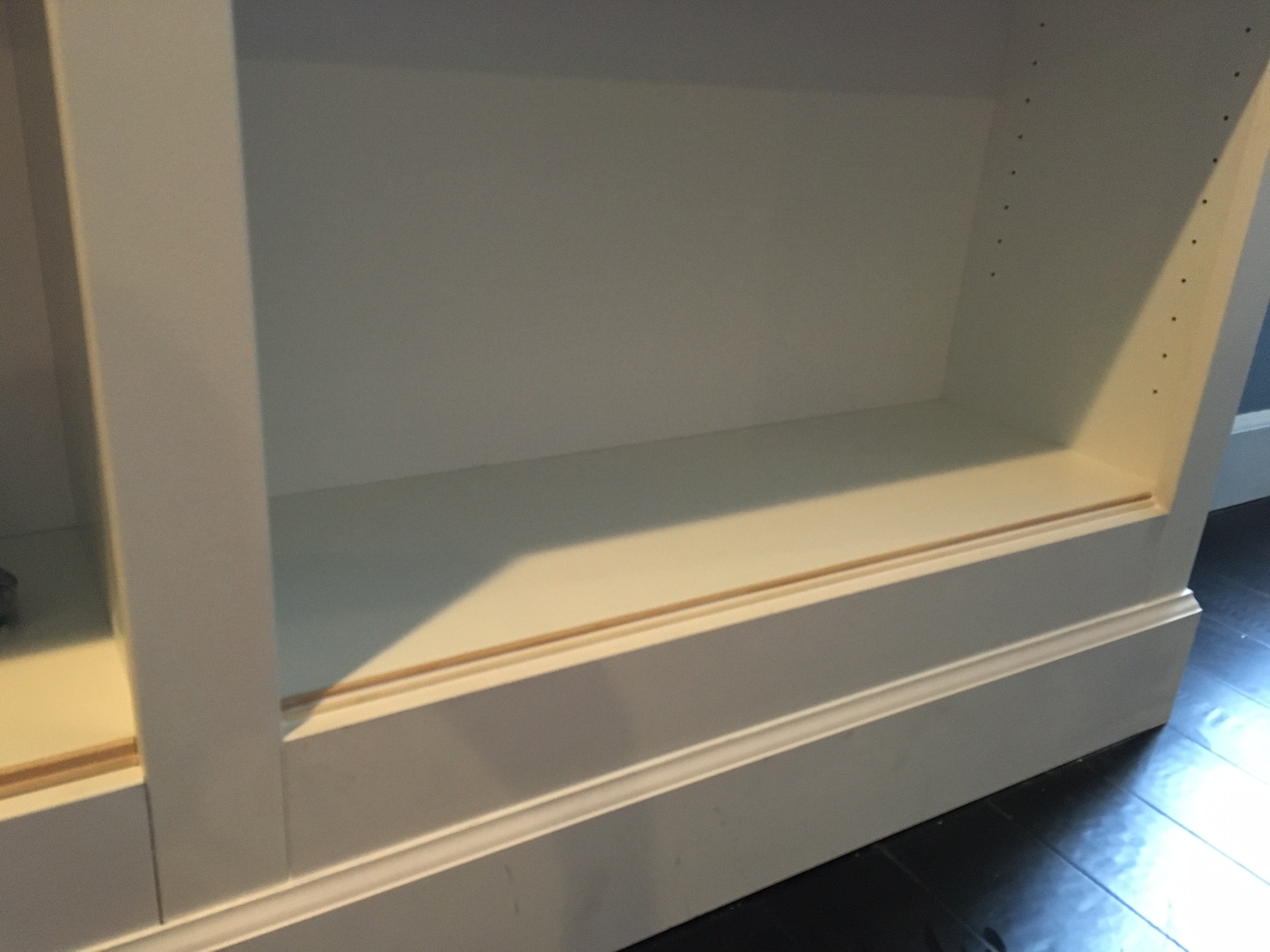 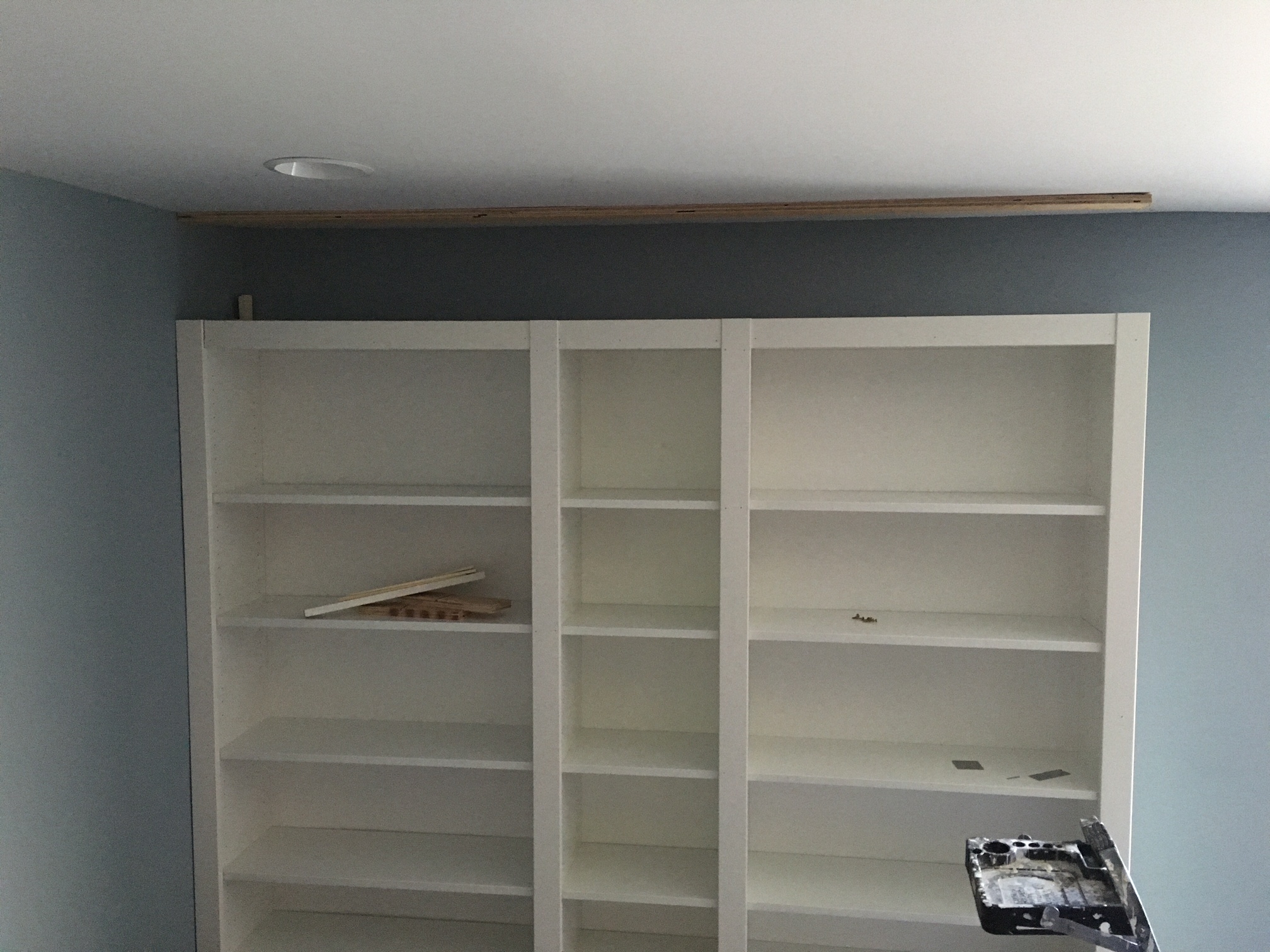 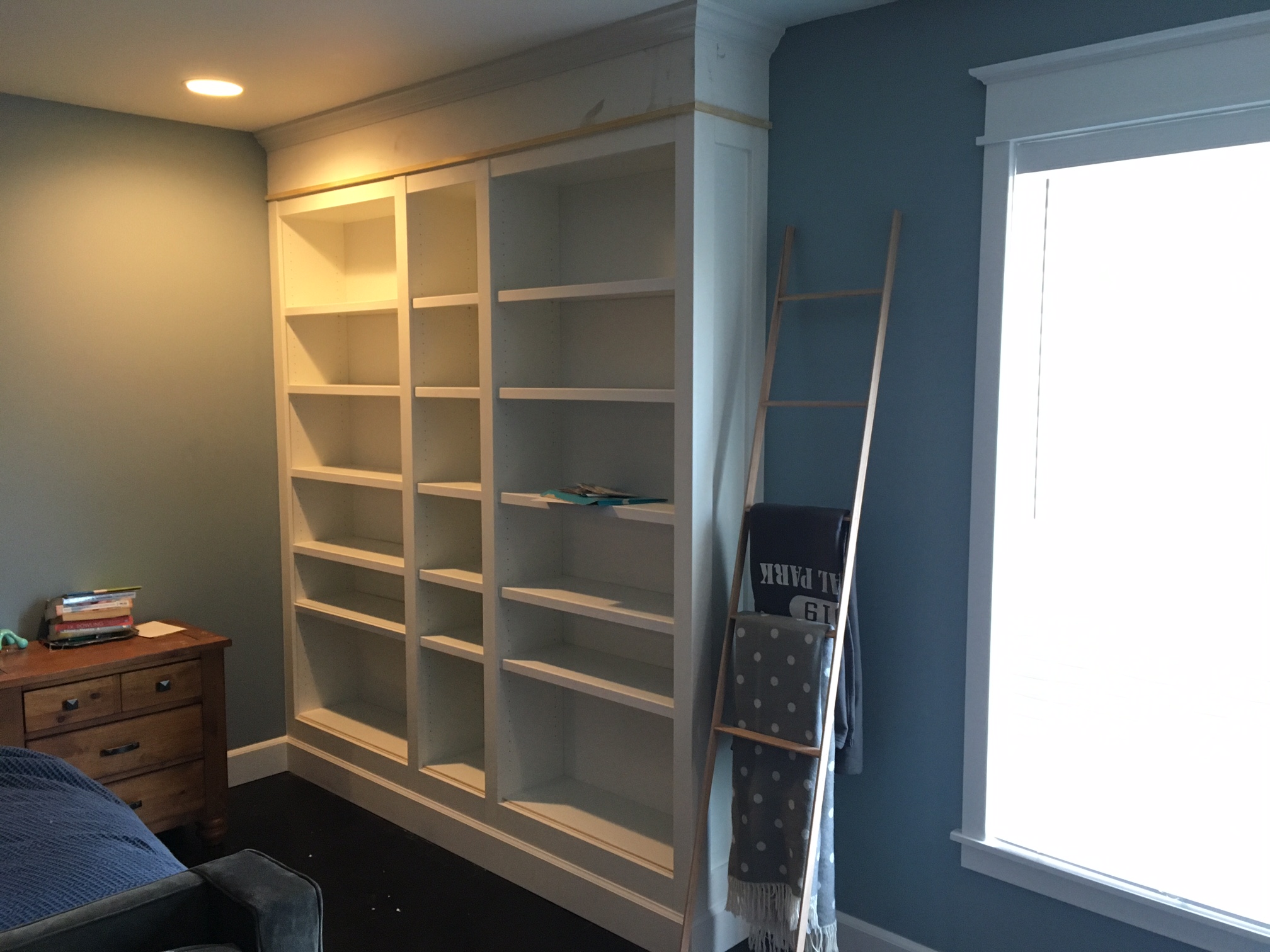 To clarify, the tall, flat part of the crown is 1x the height of the space between the billy and the ceiling and nailed into that board we put on the ceiling and a couple of boards we attached to the top of the billy that also secured all the billy’s together on the top. Our roof trusses run perpendicular to the bookcases so we were able to attach the ceiling board right into them. If you aren’t able to do this use drywall anchors when you attach your board.

I miter cut the corners so that the seams aren’t visible. Then I covered the seam between the 1×3 and the top with some square trim. The crown was just a larger more ornate version of the crown on our windows. I also attached some of that lattice to the front of each shelf. Then I filled all the holes, caulked all the seams, lightly hand sanded everything and wiped it all down, primed the bare wood surfaces and then painted everything with two coats of my favorite trim paint – Ben Moore Decorator’s White in a semi-gloss finish.

Step 6: dress them up! Then take some more poorly exposed photos to show them off! 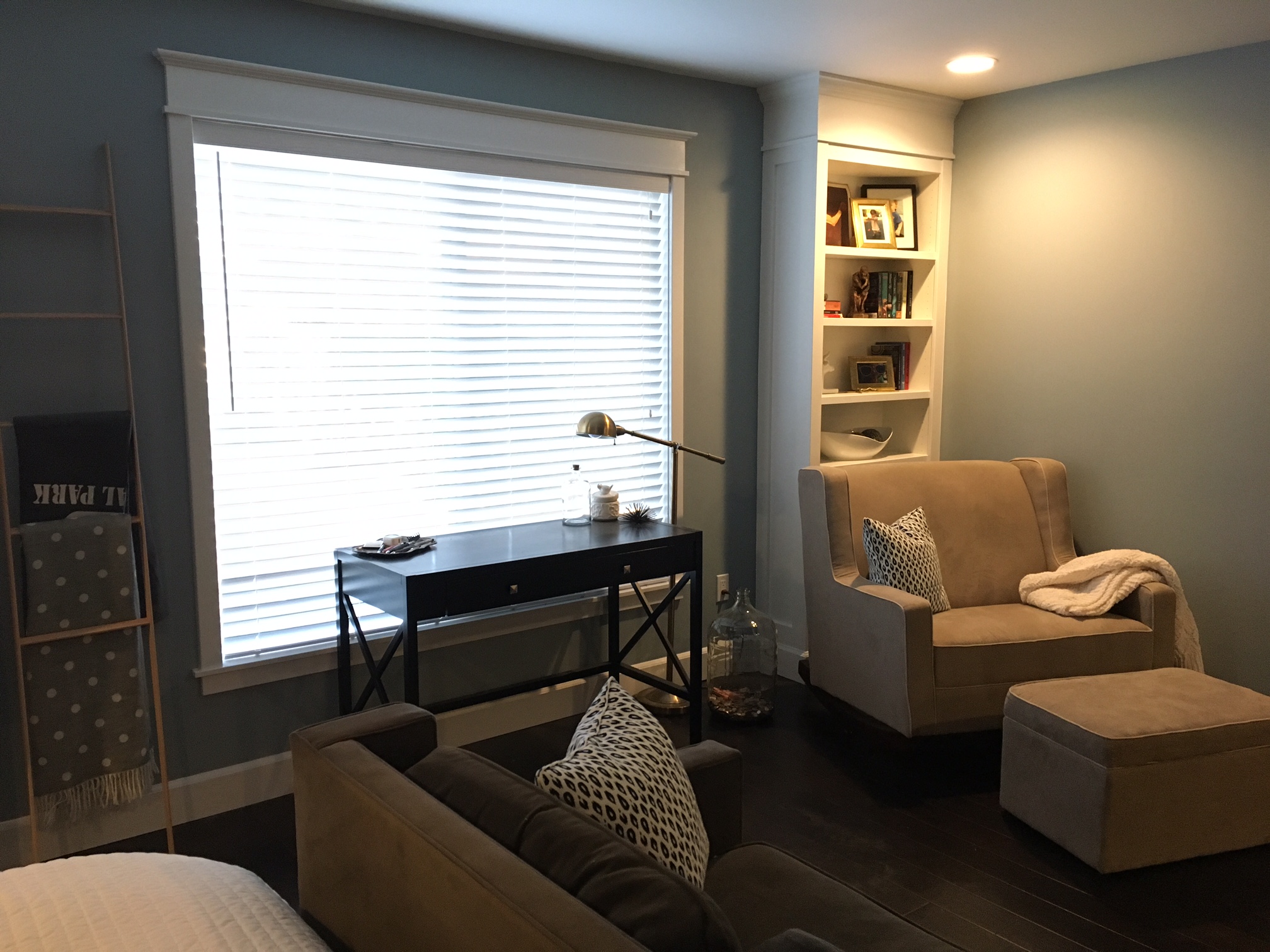 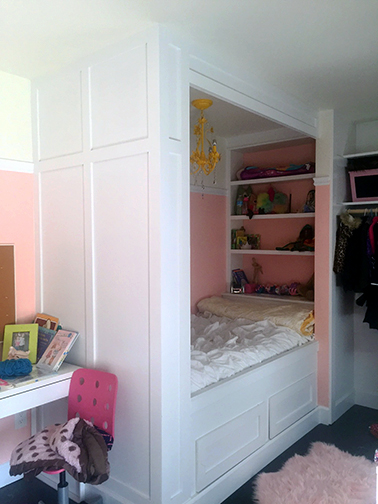 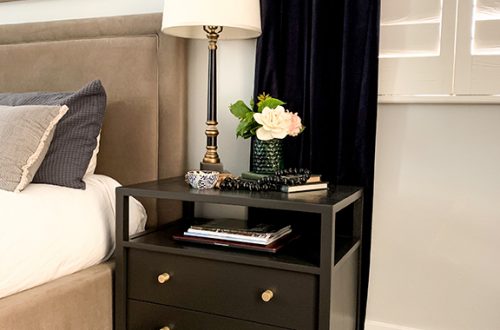 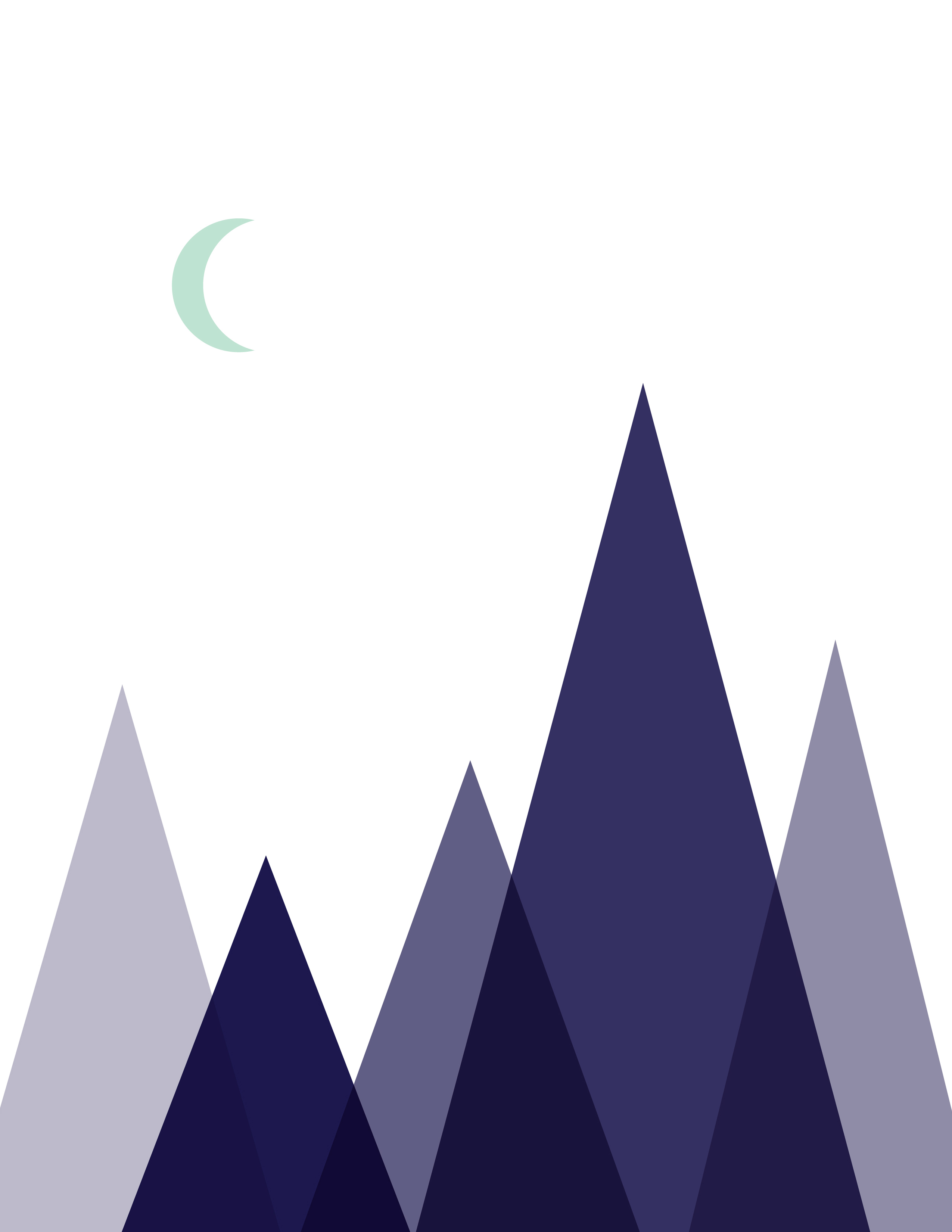