Before we could begin coping the bondbeam had to be waterproofed. We used a product called Super Blockade by Merlex – it was recommended by the coping manufacturer. I put two coats on. It mixes up like thinset. The first coat I used a 6″ wide coarse nylon brush and the second coat I used a 3/4″ thick 8″ nap paint roller. 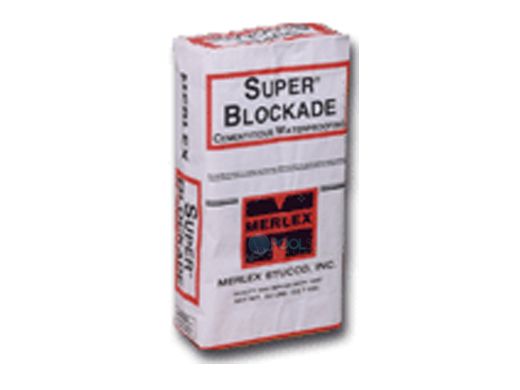 It comes in a bag like this ^ 🙂 Just add water! This helps protect against hydrostatic water pressure from the dry side going to the wet side. In other words it keeps the glass tile from popping off. You only need to waterproof where there won’t be plaster coverage – since the plaster (in our case pebbletech/similar) is essentially waterproof. They also recommended applying to the first 3″ of bondbeam on the dry side.

The bondbeam has to be clean and free of debris and loose pieces – so Mike pressure washed it before I “painted” the stuff on.

The Super Blockade extends past where the tile will be installed by a couple of inches behind where the plaster will be – so that water sheds away from the tile.

We ordered the coping a couple of months ago at the recommendation of our concrete guy. He said that it would look great, be more DIY friendly and cheaper than if he came in and did poured in place coping. I guess he has too much work or something. We went with a company called Bellecrete. They are local and were very competitive with their prices and delivery time.

We chose dark gray in a sand finish with a modern profile. The sand finish keeps it from becoming slick and the modern profile is square. It arrived before we were ready and it sat on our driveway for a couple of weeks….like this…

We paid a small fee and they sent one of their guys out to measure and place the order for us. And I say measure very loosely because there is not a measuring tape involved…it’s more like templating. He came with a bunch of coping templates that look like coping made out of stencil material that he placed over the bondbeam. He started at the skimmer and worked clockwise around the pool to the bar top then from the skimmer counter clockwise, around the spa, to the bar top. As he went he would lay three coping templates down at a time – always keeping the last one down to place the next two in line then write down the “names” of the stone. The “names” (just alphabet letters like “A”, “B”, “C”…etc.) are stamped on the side of each stone – except for the straights those are unmarked. Each letter is linked to a radius as you go up the alphabet the radius gets larger. We have a bunch of “F”, “G” and “I” radiuses. So F is a tighter radius than I. When he was done measuring he drew a “map” (his words I’d call it a diagram but whatever semantics) based on the radius’ and straights he wrote down. He placed an order based on that and gave us the paper with his drawing. Since the templates were see through he would overlap them occasionally to get the right coverage later Mike would have to cut the stones during installation to mimic the overlap. For us it was definitely DIY friendly…for the average home owner without any masonry experience I would say – leave it to an expert. You have to mix thinset and a mortar bed and use multiple levels throughout the project.

A few stones in place…

Trying to do a project while still entertaining kids.

At the end of the first day 13 in place.

The end of the 3rd 51 total stones in place.

I helped Mike by mixing the thinset and mortar and basically being his gopher. He had to cut a lot of the stones so that the overhang and joints would all be equal. They were too heavy for me to lug around. Poor Mike had to carry every single one of them from the driveway to the bondbeam then to the cutting station then back to the bondbeam…but at least I was there for most of it to help him mix the mud! 🙂

The next few days will be spent tying in the electrical and the gas, putting in the french drain, fabric, and rock behind the retaining wall and watever else needs to be done so that we can call for inspection. Mike wants to be able to pour the equipment pad so that he can get that in place but we can’t do that until after our next inspection.