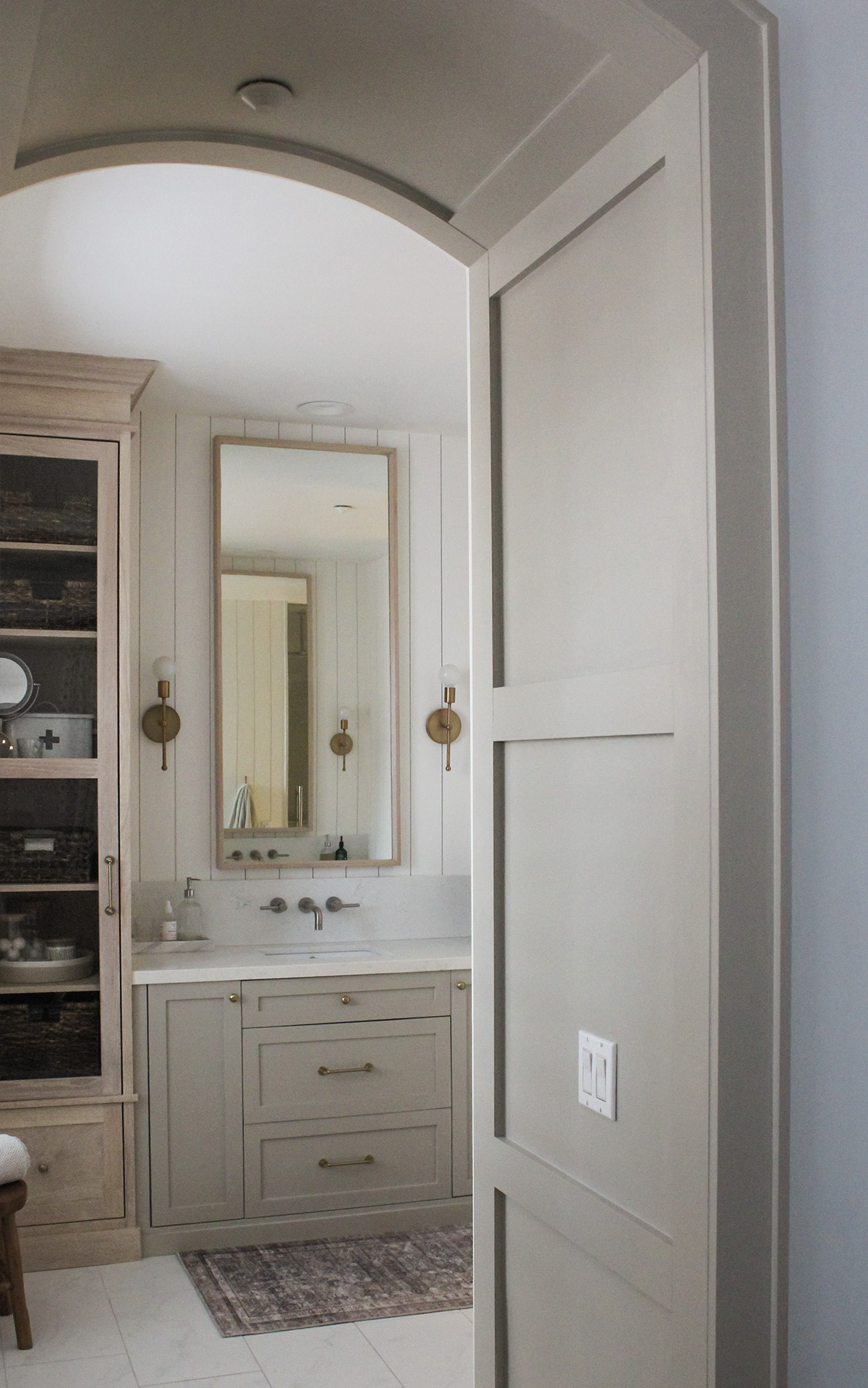 Back in January 2022, Mike and I experienced a house flood that began in our primary bathroom.

The fire sprinkler in our bathroom – specifically the one over the toilet, burst and flooded downstairs. It’s frustrating because we had just remodeled our bathroom. And we were really happy with how our entire ensuite turned out.

However, because of the flood I was forced to complete the same work over.

Skip the before, middle and go right to the reveal.

All Sources for our primary bathroom can be found here.

Some of the links I share are affiliate links, and if you purchase through them it won’t cost you any extra, however, I may be paid a small commission. That small support helps me keep the lights on and we appreciate all of it.

Before: A Primary Bathroom with an Identity Crisis.

Let’s see some before photos of our primary bathroom.

When we moved in, we did a quick fix and painted the walls and covered the dated tile with vinyl. I also installed new door casings and baseboards.

We had this craftsman style trim in our last house. Mike and I loved how it looked there, we ordered material to do it here. I regretted the decision the whole time I installed it. Because of the flood damage I had to re-do the door casings.

I knew now would be the best time to change the style and get it right.

A couple months after moving in we added an Ikea Pax system to the closet. Previously held together by drywall anchors, it’s a mystery the closet hadn’t been replaced sooner. It’s either a testament to how well drywall anchors work or how lucky the previous owners were.

On the vanities, the Corian countertops were yellowed and the drawers were in bad shape.

It is kind of hard to tell, but before our first remodel, the only bathroom lighting were the two lights over the vanities and the one over the bathtub.

After: the initial primary bathroom remodel

Mike added several can lights and moved the overhead vanity lights to sconces that flanked our tall mirrors.

We demoed and tiled the floor with a ceramic faux marble. I built new vanities and a linen cabinet. We enlarged the shower by 18″ in length. We built benches on either side of the shower facing each other. A shower ledge for all of our products. Added two ceiling mounted rain heads, two shower wands, and a steam unit.

I trimmed the alcove bath arch way. Altered the window shutters to fit inside the window frame instead on the outside. And I added oak floating shelves for extra storage. We also changed the tub from the oval to an under-mount rectangle. Swapped the faucet location and I trimmed the apron with box moulding.

We removed the door from the doorway and shrunk the opening a few inches from 36 to 32″.

Every time I post a picture of a room painted Benjamin Moore Stormy Sky, I get a dozen messages asking me for the name.

Ten years ago, before I had ever used Stormy Sky, I was so nervous trying it. The color is dark, saturated and so moody. Dark colors like this are such a commitment. Trying to go lighter after means you have to prime the walls. Sometimes twice to cover the darker color and get the wall ready to re-paint. I couldn’t find any inspiration photos from other people who had used it before.

However, I went for it anyways and now Stormy Sky has become one of my go to, fail safe colors. It’s so safe that Mike has told me I can paint it whenever and wherever.

I have used this for every single toilet room of ours for the last three bathrooms. Our toilet room was Stormy Sky before the flood. I had zero interest in painting it any other color.

The flood replaced this view with a sad version of what used to be.

The flood: destroyed our shiplap walls and bathroom ceilings

Shiplap, made from mdf, quickly soaks in water. The pieces that didn’t touch the floor were salvaged.

We also took the open wall and ceilings as an opportunity to make a few minor upgrades. We combined the fan and light into a single recessed can light/fan fixture. He also added a fan/recessed light combo fixture next to the shower door. He wired that one to turn on whenever the shower lights are on.

Mike pulled Pex plumbing to the toilet water inlet and abandoned the rolled copper below the foundation. I had him end it above the future baseboards too.

After the flood and the final reveal

When we first remodeled our bathroom, we didn’t shiplap the toilet room although we shiplapped all the other bathroom walls. We had to remove all the drywall, even on the ceilings, because this was the epicenter of the flood. Instead of drywalling and retexturing we went over the new drywall with shiplap to match the rest of the bathroom.

I love the new door casings and plinth blocks I installed. I now have zero regrets about the trim work in our home.

Mike’s side of the bathroom. I painted our vanities Sherwin Williams Feldspar Pottery.

My side of the bathroom. It was an easy sacrifice to remove the sit down vanity area and replace it with a linen cabinet and a larger shower.

I have never revealed the final photos of our shower. We have two rain heads, two shower wands, and a steam unit. The valves are all controlled via a digital valve made by Kohler, Kohler DTV+. We can turn the shower on with our phones, have it only start when it reaches a certain temperature and it is programmable for personalized shower experiences.

Instead of continuing the baseboard underneath the shower entrance as before, Mike and I used a remnant piece of quartz. The baseboard before the flood was already showing signs of water damage. Hopefully, using quartz and sealing well around it will keep the surrounding baseboards in better shape.

We also added the towel hook for easy towel access while showering.

This post is one of an 8 week series of posts part of the Fall 2022 One Room Challenge. We chose our bedroom ensuite in order to get one large area of the house done since the flood we had in January.

This post is week 8. This post is part one of a three part final reveal. Due to the complexity and amount of rooms for this project I will be separating the reveal in to three separate posts in order to showcase each room and give them the attention they deserve.

I’d love for you to read about other One Room Challenge designers. If you like this post you could read about the first time we remodeled this bathroom.

If you enjoy building stuff for your home, check out my post from last week, it’s a beautiful console table with very unique legs for under $250. Or if you love a good hack I converted my standard stainless steel dishwasher into a paneled dishwasher here!

If you just stumbled upon us, sign up for our newsletter. Then I will send updates right to you. Don’t worry, we aren’t the types who send stuff every day…I’m lucky if I get something out once a week.

Disclaimer: Working with power tools and DIY projects can be dangerous and post inherent risks. While we work hard to ensure the accuracy and effectiveness of the tutorials along with the information displayed on this website, Hambels Get Real cannot be held responsible for damages or losses sustained or incurred in the course of your project or in the use of the item you create.

Apartment Therapy is the official media partner for the One Room Challenge and I am pretty excited about it because they do such a great job featuring small time and big time designers. 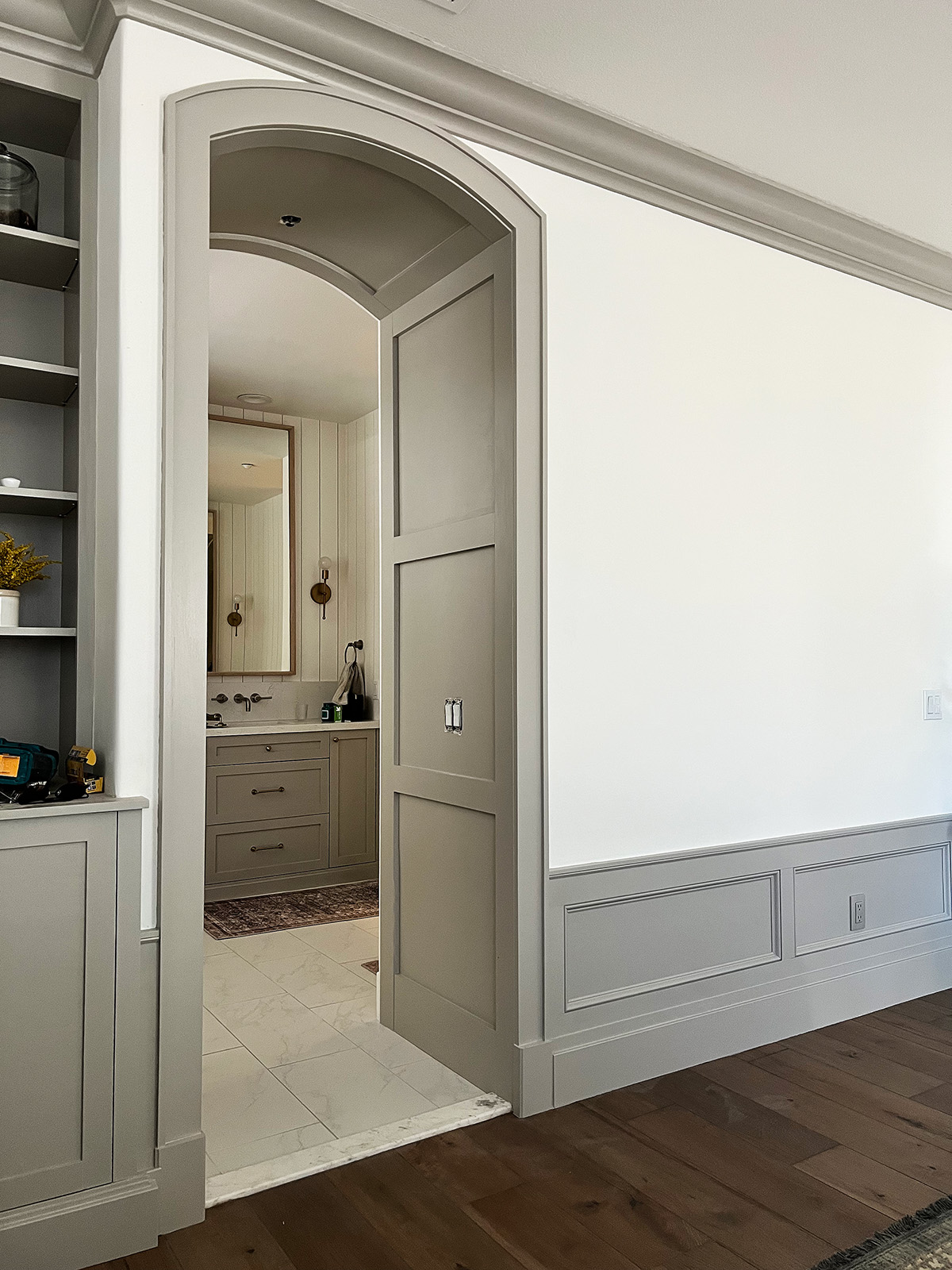 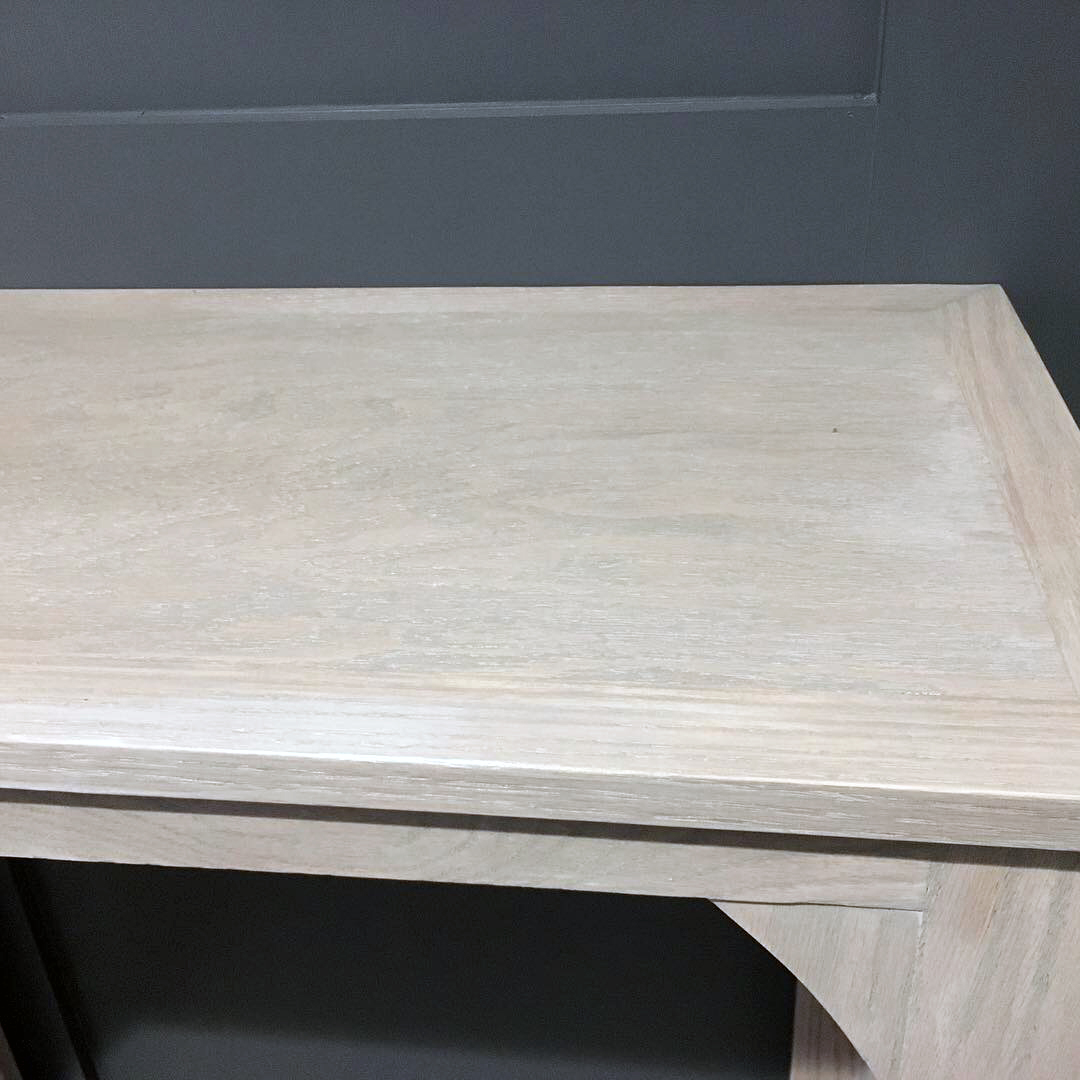 Hi! I'm Joannie and I love to teach others how to add character to their homes. Our blog has easy diy builds to more complicated ones (like the second story addition we diy'd). You can read more about us here :)

We use cookies on our website to give you the most relevant experience by remembering your preferences and repeat visits. By clicking “Accept”, you consent to the use of ALL the cookies.
Do not sell my personal information.
Cookie SettingsAccept
Manage consent

This website uses cookies to improve your experience while you navigate through the website. Out of these, the cookies that are categorized as necessary are stored on your browser as they are essential for the working of basic functionalities of the website. We also use third-party cookies that help us analyze and understand how you use this website. These cookies will be stored in your browser only with your consent. You also have the option to opt-out of these cookies. But opting out of some of these cookies may affect your browsing experience.
Necessary Always Enabled
Necessary cookies are absolutely essential for the website to function properly. These cookies ensure basic functionalities and security features of the website, anonymously.
Functional
Functional cookies help to perform certain functionalities like sharing the content of the website on social media platforms, collect feedbacks, and other third-party features.
Performance
Performance cookies are used to understand and analyze the key performance indexes of the website which helps in delivering a better user experience for the visitors.
Analytics
Analytical cookies are used to understand how visitors interact with the website. These cookies help provide information on metrics the number of visitors, bounce rate, traffic source, etc.
Advertisement
Advertisement cookies are used to provide visitors with relevant ads and marketing campaigns. These cookies track visitors across websites and collect information to provide customized ads.
Others
Other uncategorized cookies are those that are being analyzed and have not been classified into a category as yet.
SAVE & ACCEPT